The self-styled “Lemon Law King” has taken a round in his battle with Tesla Motors, the battery-carmaker agreeing to a settlement of over $100,000 on behalf of a Wisconsin doctor who experienced major problems with his Model S sedan.

The case is reportedly the first lemon-law case involving Tesla and generated significant headlines after Tesla posted questions about the validity of the owner’s claims on its corporate website. But, in the end, Milwaukee-based attorney Vince Megna said, “We got back every penny we asked for.”

The suit was filed on behalf of Robert Montgomery, a Wisconsin doctor, who claimed that his Model S was out of service for a total of 66 days in the months after he purchased it in March 2013. He claimed to have experienced a wide variety of problems, including door handles that wouldn’t always operate, as well as a transmission that wouldn’t shift into Drive.

Complicating matters, each repair required the vehicle to be taken by flatbed to the nearest Tesla dealer, in Chicago.

According to Megna, Tesla’s service techs failed to find and repair the problems. But that’s where the two sides differed. 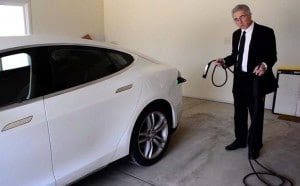 Attorney Vince Megna with the Tesla Model S that was the center of the lemon law dispute.

In a blog posting, Tesla suggested that a fuse linked to some of the problems may have “been tampered with.” The service tech then “applied non-tamper tape to the fuse switch. From that point on, the fuse performed flawlessly.”

Tesla went on to claims, “there are factual inaccuracies,” and noted that attorney Megna had filed an earlier lemon law suit on behalf of the same owner against Volvo.

The Lemon Law King denied the allegations of tampering, and dismissed the other implications, pressing on with his lawsuit under Wisconsin’s consumer-friendly regulations.

At one point, Tesla proposed it would take the Model S back – but that Dr. Montgomery would have to swallow $7,000 of the original cost.  In the end, the two sides negotiated that down to a mere $263.48 – while Tesla agreed to kick in another $18,500 for attorney fees.

Despite its battle, Tesla initially insisted it does “believe in lemon laws.” For now, however, it is simply declaring through a spokesperson, “case…closed.”